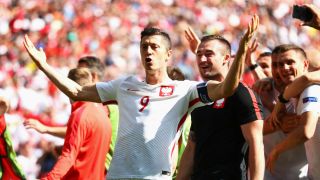 Robert Lewandowski became the first player to score 16 goals in a major European international qualifying campaign on Sunday as Poland booked their place at the World Cup.

The Bayern Munich star had been tied with Cristiano Ronaldo as the section's top scorer on 15 prior to his side's final Group E game against Montenegro, where they needed a point to progress.

Poland saw off a spirited fightback from the visitors to win 4-2, with the third home goal - five minutes from the end - coming from Lewandowski.

That strike made the 29-year-old the first player to hit 16 in a single campaign of either the UEFA section of World Cup qualifying or the European Championship equivalent.

Behind Poland, Denmark booked a play-off spot with a 1-1 draw against Romania in Copenhagen.

And Northern Ireland are also assured of a place in November's crunch play-off fixtures, with Slovakia's leapfrogging of Scotland in Group F meaning Michael O'Neill's men can no longer finish as Europe's worst pool runners-up.

Slovakia, by contrast, must wait to see how Wales and Croatia fare to see if they will join Denmark and Northern Ireland in the draw.