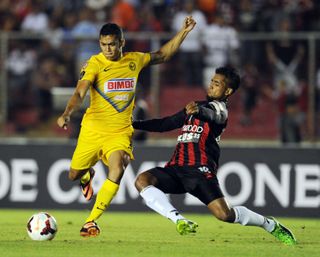 America - who won the Clausura earlier this year - top the Apertura table after nine matches with seven wins, one draw and one defeat.

They have played at least one less match than every other side in the league and itn most cases it is two, due to their participation in the CONCACAF Champions League.

Yet they still top the league after a superb run that has seen them score 21 goals and concede just eight.

In the form of Raul Jimenez they have a prolific goalscorer, with the 22-year-old having netted six in eight Liga MX matches this season.

He has also scored in his last three fixtures, including a double in a 3-0 Champions League win over Sporting San Miguelito of Panama.

They will head to Veracruz, who are placed ninth, full of confidence, and will face a side who have not won any of their last seven fixtures.

Veracruz do possess the league's leading scorer though, with Angel Reyna having netted eight strikes already this season.

Leon sit second and are level on points with America, with their next challenge coming at Cruz Azul on Saturday.

Leon have lost just once this season and head into the match on the back of a 2-1 win over strugglers Guadalajara.

Cruz Azul are eighth in the table but have lost their last two home fixtures and will be desperate for redemption in front of their own supporters.

Morelia and Queretaro are also battling for top spot and face Santos Laguna and Tigres UANL respectively, while at the other end of the table, bottom-placed Pumas UNAM visit Monterrey.

Atlante climbed off the bottom of the table with a 1-0 win over Pumas UNAM last week and visit Toluca, while Atlas - who have drawn seven of their 11 matches and remain winless - travel to Guadalajara.

Atlas have recalled defender Leandro Cufre ahead of the clash, after suspending him last week for his protestations against manager Omar Asad, who he wished to be sacked.

Reigning Apertura champions Tijuana sit 10th and will be hoping to begin a push up the table at Puebla and Chiapas host Pachuca in the weekend's other fixture.