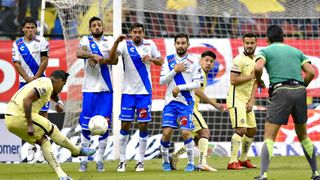 True to tradition, we've had just one weekend of action in Liga MX and already the discussions are focusing around which managers will go and which teams need to buy as quickly as possible to salvage their season.

There's plenty to talk about, so let's take a look at the talking points ahead of the second round of the Liga MX Clausura:

IT'S A BIG WEEKEND FOR ... NACHO AMBRIZ

It's too early to panic, but it wasn't a good start to the year for Ignacio "Nacho" Ambriz. The America manager couldn't guide his team past the semifinals in the Apertura, looked on as Las Aguilas crashed out of the Club World Cup, and instead of getting a reassuring win in week one, America bumbled to a scoreless draw at home against Puebla. This week, rumors emerged that former Porto manager Julien Lopetegui is being lined up as a replacement.

"For me, it's not good that they might say a coaching staff is going to come when there already is one and one that's killing itself for the group to make it better and try to get up to 100 percent," forward Dario Benedetto told reporters. "We're aware we didn't play well, but we were able to get an important point."

It's clear the players aren't trying to think about what a post-Ambriz America would look like, but with Atlas looking very strong in week one and Ambriz continuing, the thought that his dismissal may come sooner rather than later has to be creeping in. The 50-year-old will sleep much better Saturday if his team comes back from Guadalajara with a result.

The season started in remarkably similar fashion for Cruz Azul and Chivas. Both grandes were hoping for more in week one. It was the first match of the Clausura after a disappointing Apertura that finished without Liguilla play despite changing managers early in the campaign. Both teams also made a number of offseason moves and held leads in week one before ending with 2-2 draws.

Week two's showdown in the capital will see both teams desperate to prove that they can compete, as their sizable fan bases expect.

Chivas' debutants Carlos "Gullit" Pena and Orbelin Pineda played their parts well, but the midfield will have to be stronger than it was was against 10-man Veracruz on Sunday. Cruz Azul manager Tomas Boy may give forward Joffre Guerron a bigger role than chasing the match with only minutes left. Ultimately, the largely unchanged defenses will have the biggest say in who wins the first meeting between two huge clubs this tournament.

KEEP AN EYE OUT FOR ... DEFECTS IN NEW STADIUMS? OR THEIR TENANTS?

Puebla unveiled a shiny, remodeled Estadio Cuauhtemoc just months ago, and pictures and reports circulated that appeared to show the ground's modern facade with several imperfections. The club and the architects said things weren't as they seemed and there was some general upkeep being performed.

Fans will keep a close eye on the facility this weekend when Monterrey visits the ground. The Rayados opened a brand new facility last tournament (a stadium that was criticized for lacking the environmental permits needed, among other issues).

Saturday's hosts were disappointed to come away from Estadio Azteca with a draw in week one after dominating the match but being stymied by goalkeeper Moises Munoz. Monterrey got its campaign off to a good start with a 1-0 victory over Pumas thanks to a Rogelio Funes Mori goal. The Argentine will be critical for the Rayados, who have a few injury concerns including American defender Edgar Castillo, who left training Thursday with an ankle issue. The stadiums may not have blemishes after all, but the teams could have weaknesses exposed in this weekend's contest.

QUOTE OF THE WEEK

"Everybody has the goal of going to the national team or going to Europe in their mind. Like I've said, Tigres is on top of a lot of European teams, speaking from a sporting perspective," - Tigres midfielder Guido Pizarro.

The Argentine (who has been naturalized as a Mexican) midfielder has played only in his native country and in Mexico but after being the focus of recent transfer speculation seems set to stay in North America. Joao Rojas of Cruz Azul, who similarly has never played in Europe, made similar comments about the league's strength this week.

Tigres return home for the first time since winning the Apertura this weekend when they host Morelia. Toluca topped the reigning champion thanks to a late goal in the opener.

THE BIG ISSUE ... HOW CAN OFFICIATING IMPROVE?

In the same week his brother Alejandro was getting nominated for more Oscars, Hector Gonzalez Inarritu was presenting officiating objectives to the federation's referees. Hector, the head of the referee commission, had plenty to discuss. Several of the opening round's matches were poorly officiated, with officials playing a major role in the outcome of the game.

"I can't promise that there won't be errors, but we're going to work to lessen them and make it so they don't influence the match," he said.

In particular, penalty calls seem inconsistent in Mexico even in the same matches much less between different games. Getting referees on the same page for this major decision would be a huge coup. That's a problem that rears its head all over the world. Looking specifically at Liga MX, many referees seem intent on retaining control of the match, which is a positive thing. The issue is when they try to do that by going to the book as a first recourse. Referees could also manage matches better, using language to diminish situations before handing out cards.

Week one was rough. Week two will be another chance for Liga MX referees to show they, like the players, are the class of the region.