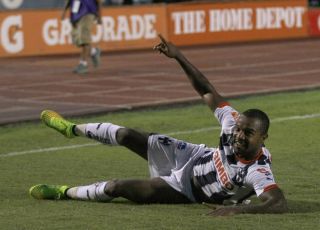 Leon won both the Apertura and Clausura titles in Mexico last term but have made a very poor start to their defence of the former.

And the club's latest defeat - their eighth in 11 matches this season - sees them 16th in the table, just three points above the bottom-placed Morelia.

Dorlan Pabon fired them ahead in sensational fashion, taking two touches before thrashing home from 20 yards in the 16th minute.

Mauro Boselli levelled proceedings three minutes after the break, nodding home from three yards after a corner had been flicked on.

But parity lasted just 13 minutes before Jesus Zavala scored from a header, with his powerful near-post effort too good for Leon goalkeeper Christian Martinez.

And Pabon wrapped up the win with six minutes left when he simply side-footed beyond Martinez after a quick counter-attack.

Monterrey are four points behind leaders America, who recorded a comfortable 2-0 home win over Veracruz.

Michael Arroyo put Monterrey in front after 23 minutes, angling a left-foot effort into the bottom-right corner.

And a looping Paul Aguilar header on the stroke of half-time settled the contest at Estadio Azteca.

Ronaldinho was on the scoresheet for Queretaro but it was not enough to get a point in a 2-1 loss at Atlas.

Enrique Esqueda gave Atlas the lead and Edy Brambila looked to have sealed their win with an 89th-minute goal.

Ronaldinho's 94th-minute free-kick ensured a nervy finish for the hosts. The Brazil star has scored in two of his three appearances so far in Mexico.

Atlas are five points adrift of America and just ahead of Toluca, who beat Guadalajara 3-1 on Thursday thanks to an Edgar Benitez double.

Morelia lost their seventh game of the season, slumping to a 1-0 home loss against Pachuca, while fellow strugglers Universidad Guadalajara drew 1-1 at Chiapas.

Pumas UNAM extended their unbeaten streak to six with a 2-1 win at Puebla, while Tigres UANL and Santos Laguna drew 1-1 and Tijuana and Cruz Azul played out a goalless draw.