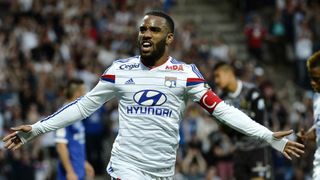 Lyon - capitalising on previous leaders Paris Saint-Germain being in UEFA Champions League action - eventually broke down a stubborn Bastia defence in a victory that saw Clement Grenier make his long-awaited return from injury.

The hosts were frustrated for much of the first half at the Stade Gerland, Ghislain Printant's men defending like a side embroiled in a relegation battle.

Jordan Ferri, Nabil Fekir and Lacazette all went close prior to the interval before Grenier's introduction helped instil further creativity within Fournier's ranks.

In his first senior outing for 237 days, the midfielder crossed for fellow substitute Yattara to finish 13 minutes from time.

The forward had only been introduced off the bench two minutes earlier, but his impact was almost immediate and the points were sealed courtesy of Lacazette's 25th league goal of the campaign.

A late flurry of pressure from the visitors failed to amount to anything as Lyon moved two points clear at the top, with Marseille and PSG travelling to Nantes and Nice respectively this weekend.