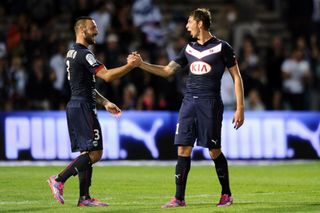 Both sides have won their first two matches of the new campaign, scoring five goals and conceding one in the process.

Spirits are particularly high at Bordeaux, who came from behind to beat last year's runners-up Monaco 4-1 on Sunday.

Uruguay forward Diego Rolan scored twice in the impressive fightback and Bordeaux could be boosted – ahead of their trip to the fourth-placed Nice - by the arrival of Liverpool defender Tiago Ilori.

Ilori, who joined the Anfield outfit from Sporting Lisbon for a reported fee of £8 million in September, signed a season-long loan deal at the club on Tuesday.

"I'm here to help the team. I haven't played for a few weeks so I want to play anywhere, anytime.

Nice followed a 3-2 win over Toulouse on the opening day with a goalless draw at Lorient last time out.

Saint-Etienne also produced a come-from-behind win last weekend, with three goals in the final 30 minutes giving them a 3-1 success against Reims.

Next up is a tricky trip to a Rennes side that hammered rock-bottom Evian 6-2 on Sunday.

Saint-Etienne do have a fixture before their meeting with Rennes, though, as they visit Karabukspor for the first leg of a UEFA Europa League play-off on Thursday.

That means quick recovery will be essential for Christophe Galtier's men if they want to keep the pace with Bordeaux.

Evian's task has only got tougher as they welcome the visit of the French champions – Paris Saint-Germain - on Friday.

The bottom-placed side have conceded nine goals in two games, but Laurent Blanc's side will be without the injured Zlatan Ibrahimovic (rib), Thiago Motta (broken nose) and defender Gregory van der Wiel (back), who were all injured in PSG's 2-0 win over Bastia on Saturday. PSG captain Thiago Silva (hamstring) will also miss out.

Evian will take heart from their home record against PSG, though.

Two losses from as many games leaves Monaco sitting second-bottom and they will be desperate for an upturn in fortunes when they battle with Nantes on Sunday. The day's other match sees Lyon host Lens.

On Saturday, Marseille will aim for their first win of the season when they visit Guingamp, while Bastia take on Toulouse and Lille clash with Lorient.

Montpellier – champions in 2011-12 – will go in search of back-to-back wins against Metz and Reims come up against Caen in other matches.