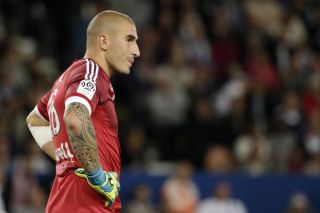 Saint-Etienne goalkeeper Ruffier miscontrolled a simple back-pass from Jeremy Clement in the 24th minute and was unable to prevent it from crossing the line before he desperately hacked it away, with only a sympathetic handshake from Ibrahimovic to console him.

And that set the tone for a miserable night for the visitors, who were completely outplayed in the French capital.

Ibrahimovic opened his account shortly before half-time with a thumping header and the Sweden international – returning from a rib muscle injury – added two more goals in the second half to take his league tally to five for the campaign.

Those goals after the interval sandwiched a spectacular Edinson Cavani strike as the hosts cruised to a resounding victory.

Defending champions PSG had struggled to recreate their dominant form of 2013-14 in the opening weeks of the new season, winning just one of their first three league matches, but a triumph of this nature is sure to fill coach Laurent Blanc with confidence.

Making PSG's win more impressive was the absence of key men Thiago Silva and Yohan Cabaye, through injury and suspension respectively, while for Saint-Etienne, the result ended their unbeaten start to the campaign.

Blanc made four changes from last week's goalless draw at Evian, as Thiago Motta featured for the first time since Bastia striker Brandao broke his nose with a headbutt in the aftermath of PSG's 2-0 win earlier this month.

Ricky van Wolfswinkel headlined Saint-Etienne's three alterations but predictably it was PSG and Ibrahimovic who threatened first, with the forward testing Ruffier with a low 30-yard free-kick in the 11th minute.

With the game devoid of any real pattern, PSG suddenly took the lead thanks to Ruffier's glaring error.

PSG were indebted to keeper Salvatore Sirigu for maintaining their advantage as the Italian tipped Mevlut Erdinc's well-hit volley over the crossbar 10 minutes before the break.

And the save proved crucial six minutes later as Ibrahimovic met Maxwell's left-wing cross and buried a powerful header past a helpless Ruffier.

Cavani, who had been quiet throughout much of the opening period, stung the palms of Ruffier with a thumping shot from distance three minutes after the interval.

After missing the target with a trademark acrobatic volley, Ibrahimovic capitalised on a woefully short backpass to round Ruffier and poke the ball home in the 62nd minute.

Cavani then made it four with a stunning curling effort from 25 yards which flew in off the right-hand post with Ruffier motionless once again.

The keeper ought to have been sent off 20 minutes from time when he tripped Ibrahimovic inside the area, but referee Clement Turpin inexplicably awarded only a corner after the loose ball was cleared by a defender.

Ibrahimovic got his hat-trick just two minutes later, though, as he ran onto Marco Verratti's pass and slotted a low finish under the hapless Ruffier, before being withdrawn by Blanc to a rapturous reception from the home fans.