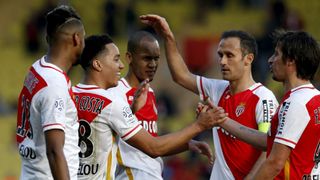 Monaco were comfortable winners against Toulouse in Ligue 1 on Sunday, romping to a 4-0 success to cement second place in the table.

With runaway leaders Paris Saint-Germain already destined for a fourth successive title, the rest are left to fight it out for the runners-up spot and automatic Champions League qualification.

And Monaco did their chances no harm as goals from Bernardo Silva and Fabio Coentrao put them in control, before Wissam Ben Yedder missed a penalty for Toulouse.

Silva scored from close range in the 28th minute after being found by Lacina Traore, while Coentrao doubled the hosts' advantage eight minutes later, netting a rebound after Guido Carrillo hit the woodwork with a diving header.

Ben Yedder saw his spot-kick saved by Danijel Subasic after Ricardo Carvalho handled in the area and things did not get better for the visitors in the second half.

Carrillo capped off a team move to make it 3-0 with 20 minutes to go and Helder Costa completed the scoring in injury time for Monaco, whose 21-point chasm to PSG is remarkably less than their advantage over the bottom two (19).

Two of the league's biggest names, Lyon and Marseille, clashed in Sunday's late game but neither side was able to claim bragging rights in a 1-1 draw.

The pair find themselves in mid-table following a disappointing first half of the season and it remains that way after Lyon substitute Corentin Tolisso cancelled out Remy Cabella's opener.