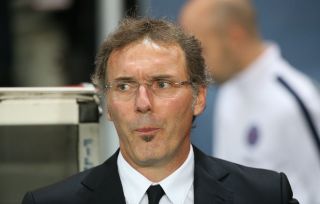 Having not suffered defeat in any competition since a 1-0 loss to Reims back in March - their only blight of any kind being a penalty shoot-out reverse in the Coupe de France against Evian – Laurent Blanc’s men were expected to continue their Ligue 1 title assault with some ease.

But they were made to dig deep to extend their sequence, with Matuidi proving the last-gasp hero.

A lively start  from the hosts was rewarded with a goal from Benjamin Corgnet after 18 minutes, before Romain Hamouma took advantage of some comical defending to strike just after the break.

Saint-Etienne were without experienced defender Jonathan Brison, while Mevlut Erding took his place on the bench after returning from injury.

Club captain Thiago Silva joined Christophe Jallet and Javier Pastore on the sidelines for PSG after failing to recover from a thigh injury, while midfield pair Marco Verratti and Thiago Motta returned from suspension.

Saint-Etienne took four points off PSG last season, and they created the first chance within the opening 10 minutes.

Faouzi Ghoulam broke free down the left-hand side before pulling back to Brandao on the edge of the area, but the Brazilian could not keep his shot down.

Zlatan Ibrahimovic and Cavani came into the match with 19 goals between them this season, but they struggled to assert any sort of early authority.

The hosts began to press themselves, and they were rewarded for their lively start after 18 minutes when a mistake by Marquinhos allowed Hamouma to get in behind the defence and square to Corgnet, who lashed his shot past Salvatore Sirigu.

The home side almost doubled their advantage in spectacular circumstances just after the half-hour mark, when Lemoine’s dipping long-range volley came back off the crossbar.

But they did grab a second after 51 minutes thanks to an embarrassing catalogue of errors in the PSG defence.

Francois Clerc’s whipped cross was spilled by Sirigu, before ricocheting off Marquinhos and into the path of Hamouma, who guided the ball home.

PSG were given a boost soon after though, when Lemoine was controversially shown a second yellow card for a challenge with Ezequiel Lavezzi, despite replays suggesting that the PSG man may have caught him with an elbow.

The visitors made their numerical advantage count just three minutes later when Maxwell found Cavani in the six yard box to tap home.

And just as it looked as though PSG were set for a rare loss, Matuidi's ball into the box eluded everyone and found its way into the net with Cavani and Irbahimovic in close attendance.