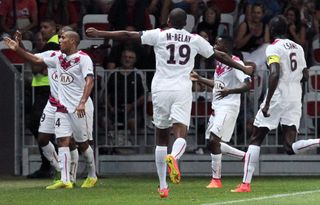 Having already claimed back-to-back wins to begin their league season, Bordeaux were forced to come from behind to make it three from three as they continue to set the pace at the top of the table.

Nice struck first through Alexey Bosetti's fine, swerving strike in the 11th minute but they could not maintain their advantage.

Bordeaux were perhaps slightly fortunate to win a 32nd-minute penalty when Eric Bautheac caught Wahbi Khazri while attempting a clearance but Cheick Diabate made no mistake from 12 yards.

Nicolas Maurice-Belay then capped a flowing move early in the second half to put the leaders ahead before Gregory Sertic ensured Willy Sagnol's team had 55th-minute breathing space.

There was still time for Diabate to turn from hero to villain when he was sent off late on for clashing with Romain Genevois but Bordeaux held on.

Meanwhile, Bielsa secured his first competitive win as Marseille coach as Andre-Pierre Gignac scored the only goal at Guingamp.

Gignac finished emphatically in the first minute of the second half, although goalkeeper Steve Mandanda had to be at his best as the visitors were forced to weather a late storm.

Lille secured a 2-0 win over Lorient to head into their UEFA Champions League play-off second-leg against Porto in high spirits.

Rene Girard’s men must overcome a 1-0 deficit if they are to progress in Europe, and the coach elected to rest first-choice forwards Salomon Kalou and Divock Origi, leaving Jonathan Delaplace and Simon Kjaer to net second-half goals as Lille moved up to second ahead of Sunday's action.

Montpellier and Caen made it two wins from three with 2-0 victories over Metz and Reims respectively.

Siaka Tiene and Souleymane Camara netted late in either half as Montpellier saw off last season's Ligue 2 champions, for whom Kevin Lejeune hit the post from the penalty spot.

And late strikes Ngolo Kante and Herve Bazile settled the first top-flight meeting between Reims and Caen in the visitors' favour.