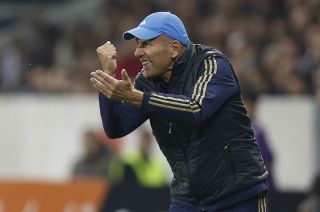 Elie Baup's side - who were undone by a 2-1 loss to Paris Saint-Germain in their last outing - were unable to find a response to Dario Cvitanich's strike at the Allianz Riviera.

With the match looking likely to head into half-time goalless, Nice broke the deadlock in the 40th minute when the Argentine forward sprung the offside trap before cleverly rounding Steve Mandana and slotting into the empty goal.

Marseille pushed for the equaliser but were unable to break down a stubborn Nice defence, with Colombian goalkeeper David Ospina on form.

The result means Nice move to fifth, level on points with Marseille who occupy fourth.

Elsewhere, 10-man Reims were defeated 2-1 by Toulouse at the Stade Auguste Delaune II.

It extends their winless run in Ligue 1 to seven matches, although Hubert Fournier's side had drawn their previous six league matches.

Oscar Trejo put the away side ahead shortly before half-time, only to have his effort cancelled out by Prince Oniangue in the 59th minute .

The match was seemingly heading for a draw before Antoine Devaux was shown a straight red card in the 85th minute.

And Reims were denied a share of the spoils with two minutes remaining thanks to Martin Braithwaite's penalty.

Toulouse now jump to seventh in the table, while Reims fall to 11th.