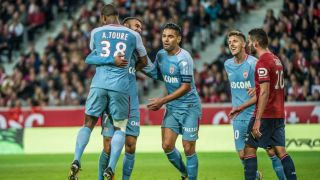 Monaco drew level on points with Paris Saint-Germain at the top of Ligue 1 with a 4-0 victory over Lille on Friday.

Radamel Falcao scored his 10th and 11th goals of the season alongside first strikes for the club for Stevan Jovetic and Rachid Ghezzal at Stade Pierre-Mauroy.

The defeat will likely pile more pressure on Lille boss Marcelo Bielsa, who insisted this week he would not resign despite a run of six games without a win.

Monaco looked the more dangerous from the off despite allowing the home side the majority of possession and they fully deserved to take a 24th-minute lead, with Jovetic firing into the bottom-right corner from the edge of the area for his first goal in Ligue 1.

Ghezzal, another arrival in a hectic transfer window, opened his account six minutes later as he arrived unmarked at the left-hand post to drill home a loose ball.

1 - Rachid Ghezzal is the first Algerian player to score for Monaco in Ligue 1 since Moussa Saïb v Guingamp in October 2001. Fennec.September 22, 2017

Lille heads had well and truly dropped, but Falcao made the points certain three minutes after half-time, heading in a rebound following Mike Maignan's save from Rony Lopes.

Fares Bahlouli at last forced Diego Benaglio into a save, but matters got worse for Lille moments later, with Falcao dispatching a penalty in confident style after Rominigue Kouame clipped the heels of Jorge in the box.

The result moves the champions on to 18 points from seven matches, level with PSG, who take on Montpellier on Saturday.