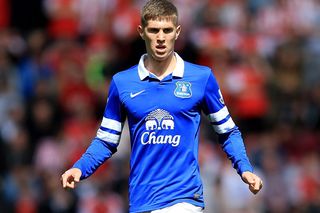 Jones was expected to be among the list of players named in Roy Hodgson's 30-man provisional squad on Monday but the Manchester United defender is facing the likelihood of missing the World Cup after damaging ligaments in his shoulder during Tuesday's 3-1 win over Hull City.

Possible heartbreak for Jones has opened the door for Stones, with the 19-year-old Everton centreback now a serious contender to be on the plane to Brazil, despite having only made 21 senior appearances for Roberto Martinez's men since arriving from Barnsley in January last year.

Although tender in years, Lineker believes Hodgson has little option but to include the England U21 international should Jones be ruled out of the showpiece event.

"I really like him - he has got a lot about him," the former England captain said at the launch of BBC's World Cup coverage.

"Sometimes central defenders need a little bit more experience than players in other positions because of the extra discipline and the nature of that particular role.

"But is he worth a gamble? Well, if England lose another one - if Phil Jones doesn't make it, for example - what else have we got?

"We have got (Gary) Cahill and (Phil) Jagielka, who have played together quite a lot, and then there is Steven Caulker, who struggles a little bit on the turn. We are short in that position."