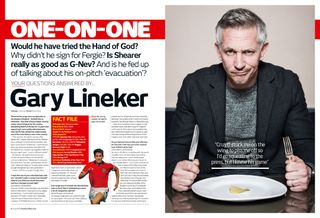 The former Leicester and Everton talisman was coming to the end of a three-year spell with Catalan giants Barcelona, where he had netted 52 goals in 138 appearances and lifted both the Copa del Rey and European Cup Winners’ Cup.

Lineker, winner of the Golden Boot at the 1986 World Cup, eventually returned to England with his former Barcelona boss Terry Venables at Tottenham Hotspur, and would add a further 80 goals to his CV and capture the FA Cup in 1991.

However, the BBC Match of the Day presenter could have been plying his trade further north instead. His agent held talks with Manchester United over the possibility of reuniting him with Welsh striker Mark Hughes, who had arrived from Barca a year earlier.

Speaking exclusively in the July 2015 issue of FourFourTwo - out now - Lineker reveals: “I was quite open-minded about my next move.

"It looked like I was going to Fiorentina for a while, but then Sven-Goran Eriksson left and so did Roberto Baggio, so that option went away.

“Then Terry Venables came along and did a deal with Barcelona very quickly. Right at the 11th hour it suddenly appeared that Spurs might not be able to do the deal, financially. That’s when my agent spoke with Alex Ferguson.

Read the full One-on-One interview with Gary Lineker in the July 2015 issue of FourFourTwo, in which Neymar tells us how he plans to reboot Brazil. Also in the magazine: Barcelona’s Selecao star on how to take the perfect selfie, 33 reasons why the Copa America will be better than the World Cup are revealed, and five Blighty-born boys who have already flown west to the MLS describe what Steven Gerrard and Frank Lampard can expect Stateside. Plus, Roma midfielder Radja Nainggolan on Ashley Cole’s Italian accent, Jay-Jay Okocha on his finest goal and Performance tips from Jason Puncheon, James Milner, Ryan Bertrand and Asmir Begovic. Available in print, on iPad and iPhone now. Subscribe!