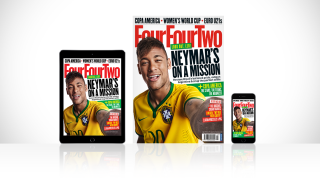 June, in an odd-numbered year. Barren and devoid of football? Is it heck. Not when you’ve got the Copa America, the U21 Euros and Women’s World Cup – and a new issue of FFT with which to satisfy your footballing urges.

This month’s exclusive cover interview is Neymar: Barcelona hero, Brazil’s saviour and a keen fan of photography. The Seleçao skipper tells FourFourTwo how he’s going to reboot Brazil, how he handles the pressure of a nation’s expectations – and how to take the perfect selfie.

Also no stranger to a camera is Gary Lineker[Smooth link - Ed.]. In this month’s One-on-One, the former Leicester, Spurs, Barcelona and England striker answers your questions on Johan Cruyff, tight shorts, almost signing for Manchester United and whether the World Cup Golden Boot is right- or left-footed.

The domestic season is on hiatus but there’s plenty of tournament action on the small screen – and we’ll talk you through all the major tournaments. There’s eight pages on the Copa America (33 reasons why it will be better than the World Cup), six on the U21 Euros (team guides plus the players most likely to be snapped up by Premier League clubs), and 10 on the Women’s World Cup (interviews with the key players).

The bags are packed, the Liverpool and Manchester City shirts folded away, and a new adventure awaits Steven Gerrard and Frank Lampard. As the legends fly west to join the MLS revolution, FourFourTwo talks to five Blighty-born boys who’ve already made their mark Stateside – from the college boy through the best English striker you haven’t heard of to the bloke who topped the scoring charts last season.

Flicking through football’s back pages, we reflect on the various forms of sugar daddies down the ages – from the debt-wiping dog-fancier who saved Manchester United to the avuncular owners who saved their hometown clubs and spent fortunes chasing their dreams, via the super-rich shipyard owners fitting out Sunderland with an extravagant team who got relegated anyway.

In Upfront we’ve got the top 10 embarrassing relatives, the snooker/football hybrid, Robert Pires and Carlos Valderrama reminiscing on their careers and former Tottenham defender Ramon Vega discussing how the flat he shared with David Ginola stank of cheese.

Planet Football brings you Radja Nainggolan exclusively interviewed, Jay-Jay Okocha on his finest goal, Lazio’s eagle mascot on a first-class plane and a guide to the world’s most politicised fans.

And in our Performance section: advice from Jason Puncheon, James Milner, Ryan Bertrand and Asmir Begovic, recipes from Willian and Jonas Guttierez – plus news that burgers are good for you. Yum!