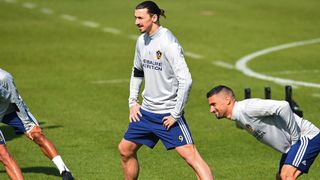 Zlatan Ibrahimovic is desperate for success with the LA Galaxy, saying "the lion is hungry" as he prepares for his MLS debut.

Ibrahimovic, 36, arrived in Los Angeles Thursday after signing a deal with the Galaxy following his stint at Manchester United.

The striker only made seven appearances for United this season after returning from a serious knee injury.

But Ibrahimovic, who could debut against rivals Los Angeles FC Saturday, said he was eager to deliver for the Galaxy.

"I know it's been a long break for me without rhythm due to my injury but I just want to go out and smell the grass and touch the ball," he said.

"After training I asked if I could go and shoot some balls. I feel young, I feel like Benjamin Button. I was born old and now I feel young.

"When I came to England they said I was old but I came in a wheelchair and after three months I was flying. Age is just a number.

"I've come here to win and I've brought my wife so she can look after the family and I can focus on the football. Tomorrow is a big game, I'm already involved and I'm excited. The lion is hungry."

"So these are the trophies, eh? We bring the sixth one."Behind the scenes on Zlatan's first day with the . March 31, 2018

Ibrahimovic has long been linked with an MLS switch and his arrival is sure to be a boost for the Galaxy.

The Swede revealed he almost made the move before heading to Old Trafford in 2016.

"It was supposed to happen before Manchester United, my head was here and I wanted to come here but it didn't happen, things go sometimes like they are not supposed to go but destiny said I would come here," Ibrahimovic said.

"LA called and I answered. The whole situation, when Becks [David Beckham] came here it gave a boost to the league. He came to Galaxy to build and set the bar and this is something that has kept going with [Robbie] Keane and [Steven] Gerrard and now I am here.

"It was very easy, LA called and I answered."