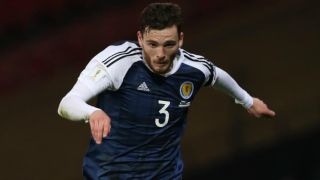 Having seen victory snatched away by a late Harry Kane equaliser in their last qualifier against England, Scotland travelled to Vilnius knowing anything other than a victory could signal the end of their chances of punching a ticket to Russia.

And Gordon Strachan, whose position as Scotland manager has been under pressure through an at times stuttering campaign, saw his side cruise to victory.

Armstrong headed in a deserved opener and Liverpool new boy Robertson joined him on two international goals, exquisitely curling the visitors to a comfortable advantage by half-time.

Slovakia's 1-0 win over Slovenia means they are four points above Scotland with three matches remaining, but Strachan's men still have crucial matches with Slovakia and Slovenia to come in the pool.

Leigh Griffiths was the star of Scotland's 2-2 draw with England and the Celtic man fired the first warning in the sixth minute, curling a well-struck effort around Ernestas Setkus' post.

Club-mate Armstrong directed the next attempt wide of the left post and the visitors were fortunate not to fall behind moments later as former Hearts forward Arvydas Novikovas cut inside Christophe Berra, only to drag his shot the wrong side of the upright.

The early end-to-end action continued with Matt Phillips firing over, while Armstrong - playing behind Griffiths - again tried his luck from range.

Craig Gordon was kept busy at the other end, the 34-year-old flying to his left to claw Novikovas' free-kick away from harm.

Scotland remained on top, though, and were rewarded for an attack-minded start when Armstrong ghosted to the far post and headed in Griffiths' corner for a 25th-minute lead.

Novikovas found time to end a busy first-half with a harmless shot over the bar as Strachan's side carried their two-goal advantage into the break.

Griffiths should have put the result beyond doubt shortly after the restart as Robertson floated an inviting cross to the far post, but the 27-year-old got his angles wrong in meeting the volley.

The striker should have been made to pay for passing up that chance when space opened up for Vykintas Slivka, the Hibernian midfielder only managing to poke a tame attempt past the left upright.

Instead, Scotland were gifted a third with 18 minutes remaining as Griffiths was afforded time to collect a throw inside the area and tee up the fast-arriving McArthur for a simple close-range finish.

Scotland will expect to make it four matches unbeaten in qualifying when they host bottom-placed Malta on Monday, with remaining matches against Slovakia and Slovenia likely to determine their fate.