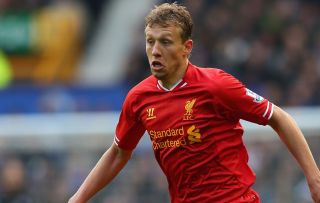 The Brazil midfielder was withdrawn just 20 minutes after coming on as a half-time substitute in the 2-2 draw with Aston Villa on Saturday as Brendan Rodgers' side were forced to come from two goals down.

Steven Gerrard's penalty eight minutes into the second half after Daniel Sturridge had reduced the deficit ultimately ensured that they left with a point, but afterwards Rodgers admitted concern for Lucas.

"He clashed knees with the opponent and felt a little click in his knee," the Liverpool boss said. "Hopefully it's not too serious but we won't know for the next 24-48 hours."

The news is the latest injury blow for Lucas, who reportedly left Anfield on crutches after the game.

The 27-year-old has had knee problems in the past and missed the second half of the 2011-12 season after damaging his cruciate ligament in a League Cup quarter-final against Chelsea.

He also missed three months last season, his first under Rodgers, after suffering a thigh complaint.