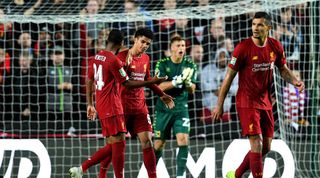 Liverpool could be expelled from the EFL Cup if they are found guilty of fielding an ineligible player in their third-round victory over MK Dons.

Jurgen Klopp's side won 2-0 at Stadium MK on Wednesday to set up a fourth-round clash with fellow Premier League giants Arsenal.

But according to The Athletic, the EFL have launched an investigation after it became apparent that one of the Liverpool players who appeared against MK Dons may not have been eligible.

The Reds are now awaiting the EFL's verdict but could be thrown out of the competition if they are found to have broken the rules.

"The club are aware of a potential administrative issue pertaining to one of our players," a spokesman told The Athletic. “We are working with the relevant authorities in order to establish the facts of the matter and will be making no further comment until this process is complete.”

The Premier League leaders will not automatically be disqualified if they are found guilty and could escape with a lesser punishment.

When Sunderland fielded the ineligible Ji Dong-won in an EFL Cup victory over MK Dons in 2014, they were allowed to remain in the competition but were forced to pay a fine.

Liverpool will hope that the EFL make a similar judgement this time around.

The identity of the player is unknown, but the issue is thought to surround an international transfer certificate, which is provided by one national association to another when a footballer moves abroad.

Klopp made 11 changes for the trip to Milton Keynes on Wednesday, with youngsters Caoimhin Kelleher, Ki-Jan Hoever, Harvey Elliott, Curtis Jones and Rhian Brewster all included in the starting XI.

Liverpool will be looking to maintain their 100% winning start to the Premier League season when they face Sheffield United on Saturday.