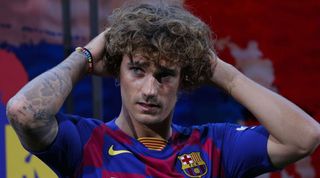 The RFEF adjudged Barcelona to have entered negotiations with Griezmann's representatives without their permission, while he was still under contract with Atletico Madrid.

The €120 million deal that took Griezmann to the La Liga champions was the biggest of the summer.

It took longer than anticipated, though, partially because of a disagreement over the fee but also because of Barcelona's failed pursuit of Neymar.

SEE ALSONeymar and the Toiss: meet the controlling circle of friends that influence his every move

But while the deal dragged on as final details were ironed out, it was the early stages of negotioans that earned Barcelona their laughable €300 fine.

However, despite the negligible amount, the Catalan giants are appealing. Barça feel that by accepting the fine they also accept guilt, but they are adament they've done nothing wrong.

Superb, Barcelona are going to APPEAL the €300 fine they have been given in the Griezmann case!— Alex Shaw (@AlexShawESPN) September 26, 2019

It was Atletico who complained to the RFEF after the transfer was completed, saying that Barcelona had tapped up the player illegally.

The Rojiblancos even released a statement saying they had the "strongest repulsion for the behaviour of both, especially Barcelona", despite Griezmann having declared his intention to leave Madrid in mid-May. The previous summer he had turned down Barça in a televised stunt called The Decision, similar to that of NBA icon LeBron James when joining the Miami Heat.

This wasn't the first time that Atletico have complained about Barcelona's conduct - they reported the Catalans in 2017 for approaching Griezmann (again) improperly.

Once their investigation was finished, the RFEF released a statement saying that Barcelona had broken the rules by entering negotiations with the player without their permission.

Griezmann, however, was absolved of any responsibility.

Although the fine was paltry, the RFEF stated that it was their only appropriate response; the other was a one-match closure of the Camp Nou (quite the leap, really). They said that such a punishment was reserved for "infractions of a different nature"...

Explained: UEFA’s new Europa Conference League competition will absolutely not get you excited