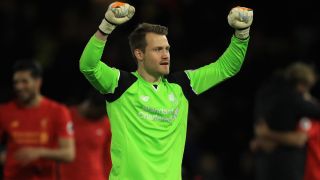 Liverpool goalkeeper Simon Mignolet told his team they had "three finals" left this season as they look to seal a top-four finish in the Premier League.

Jurgen Klopp's men claimed an important 1-0 win at Watford on Monday to consolidate third spot in the table.

With games against Southampton, West Ham and Middlesbrough to finish the season, Mignolet said the outings needed to be treated like do-or-die matches.

"We're hungry to play in the Champions League. We know what it means, not only for us, but also for the fans of the club," he told UK newspapers.

"The history of this great club has been all about fighting at the top end of the Premier League and against the best teams in Europe.

"Everybody wants it so much and we're going to keep fighting for it. We have three finals left to play."

Liverpool's win at Watford – which came thanks to a stunning bicycle kick from Emre Can – was their third consecutive victory away from home.

It followed on from wins at Stoke City and West Brom and Mignolet said: "I think we've played a lot of good football this season.

"Sometimes you have to learn how to play against these sorts of teams.

"To win at places like West Brom, Stoke and Watford shows we can do this. We have three more games like this to play.

"We have to keep that balance and grind those results out."