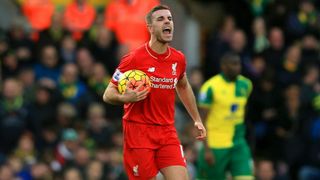 Liverpool captain Jordan Henderson knows his team have significant work to do despite their relief at picking up a thrilling 5-4 win over Norwich City on Saturday.

A nine-goal thriller at Carrow Road saw Jurgen Klopp's team recover from 3-1 down to lead 4-3, before Adam Lallana netted in the final seconds of stoppage time after the hosts had brought the scores back to four apiece in a dramatic finale.

He told the club's official website: "We managed to score some good goals, but we have still got a lot of work to do in not conceding goals. We will look at that over the next day or two.

"We have also got to improve on sharing the goals among everyone, all of the forward players getting into the box.

"Over the last couple of games, the performances have been good but we have not got the results.

"Here we got the result and that is very important for us. At half-time we came out and we knew we still had to win the game; there was still a long way to go.

"In the second half, I thought we were brilliant – hunting the ball back, getting it back quickly and creating chances. For me, we thoroughly deserved to win."

Liverpool are back in action on Tuesday when they face Stoke City at Anfield in the second leg of their League Cup semi-final tie, defending a 1-0 lead from the first leg.