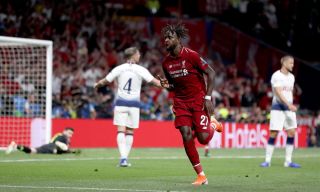 Thousands descended on Madrid for a legacy-defining encounter at the end of a scarcely-believable continental campaign, with both sides narrowly making it through the group stage and then completing jaw-dropping semi-final wins.

But only one could emerge triumphant at the Wanda Metropolitano and Liverpool would be crowned champions of Europe for a sixth time as Salah’s early spot-kick was followed by a strike from semi-final hero Origi in a 2-0 win.

Mauricio Pochettino’s players dropped to the deck as the red hordes went wild at full-time as Klopp ended his cup final hoodoo to win his first trophy as manager of the club and ease the hurt of missing out on the Premier League title.

Then, Salah left the field in tears after a clash with Real Madrid’s Sergio Ramos resulted in a shoulder injury. This time his early spot-kick set Liverpool on course for glory.

And while this all-English final was not a classic due to a mixture of the heat, tension and the teams’ three-week breaks, Liverpool fans will not care after breaking Tottenham hearts in what was their first European Cup final.

Pochettino will be frustrated his side were not able to produce more, although Liverpool goalkeeper Alisson Becker was in fine form.

Returning star Harry Kane failed to make an impact, whereas Origi once again proved an unlikely Champions League hero for the Anfield team.

Almost sold last summer, his brace in the semi-final win against Barcelona was followed by a superbly-taken strike off the bench in Madrid to seal the trophy for Liverpool as Spurs fell short.

The north Londoners were facing an uphill battle after just 22 seconds, when referee Damir Skomina pointed to the spot having adjudged Moussa Sissoko to have handled Sadio Mane’s clipped cross in the box.

The video assistant referee’s review brought a substantial wait but no reversal in decision and Salah kept his nerve to fire the spot-kick past Hugo Lloris and give Liverpool a second-minute opener.

The surprise start seemed to elevate the tension inside the ground, leading to a mistake-ridden opening period devoid of much quality.

Wayward efforts by Sissoko and Christian Eriksen were the best Spurs could muster as they failed to get the best out of star turn Kane, who had just 11 touches in the first half.

Pochettino’s men were unable to create clear-cut chances during the moments they were on top, but Liverpool were also struggling and only really threatened from distance.

Trent Alexander-Arnold fizzed an effort just wide and towards the end of the first half fellow full-back Andy Robertson saw a thumping effort tipped over by Lloris.

The second half got under way with a little more intensity but precious little extra class early on.

Origi and Lucas Moura came on as the managers turned to the heroes of their respective semi-final triumphs, but it was another substitute who went close to scoring in the 69th minute.

Mane ghosted through and Salah laid off for James Milner, whose low shot was just wide of the post. Toby Alderweireld’s last-gasp tackle prevented Mane getting away a close-range effort soon after as play became stretched.

Dele Alli’s audacious chipped effort brought groans from the Spurs faithful, who were being frustrated by a Liverpool defence led by man-of-the-match Virgil van Dijk.

Alli headed over when Spurs did find a gap, while Alisson denied Son Heung-min and then Moura.

Liverpool’s goalkeeper came into his own in the closing stages and he produced a fine stop from an Eriksen free-kick. Son missing a gilt-edged chance from the resulting corner but offside had been called.

Danny Rose, Son and Kane all lined up to be frustrated by Alisson as Liverpool kept a clean sheet and became champions of Europe.