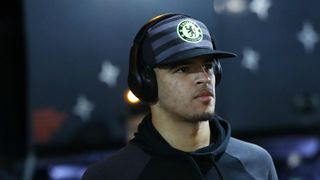 Liverpool have announced the signing of teenage striker Dominic Solanke from Chelsea.

Solanke, who is yet to make a senior league appearance for the new Premier League champions, will join Liverpool at the end of his contract on July 1.

The 19-year-old made his Chelsea debut in a 6-0 Champions League thrashing of Maribor in 2014 and spent time on loan at Vitesse Arnhem in the Eredivisie in the 2015-16 season, scoring seven goals for the club.

Solanke is a two-time FA Youth Cup champion and a winner of both the UEFA Youth League and Under-17 European Championship and he will add to Jurgen Klopp's forward options after he led Liverpool to fourth place in the Premier League.

The teenager has also represented England at every age level from Under-16 to Under-21 and is currently on international duty at the Under-20 World Cup.

Solanke scored in England's opening game of the competition, a 3-0 win over Argentina, with the Three Lions set to face Costa Rica in the round of 16 on Wednesday.