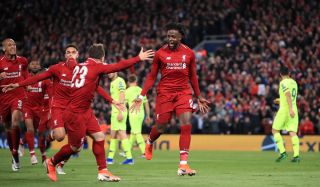 Istanbul will always be the benchmark when it comes to Liverpool comebacks in Europe but the 4-0 dismantling of Barcelona at Anfield will run it close as Jurgen Klopp’s side reached successive Champions League finals.

Trailing by three goals from the first leg no-one gave the Reds much hope but two goals apiece from Divock Origi and game-changing half-time substitute Georginio Wijnaldum saw them progress 4-3 on aggregate.

In a truly remarkable – and intense – game not only did Liverpool erase that disadvantage inside 56 minutes, they went on to score a winner and, remarkably, kept Lionel Messi quiet.

For only the fourth time in the competition’s history a team was eliminated from a knockout tie having won the first leg by three or more goals, the last occasion being Barca against Roma in last season’s quarter-final.

Origi’s timing in scoring his first Champions League goals was impeccable, as was Wijnaldum’s introduction for injured defender Andy Robertson.

Liverpool needed an early goal to increase the already vibrant atmosphere and when Robertson’s cross was deflected behind with Xherdan Shaqiri, making his first start since January, after just 53 seconds it was the ideal opening.

It became almost perfect when Origi scored in only the seventh minute, tapping home a rebound from Jordan Henderson’s shot after Sadio Mane had seized on Jori Alba’s mis-hit headed backpass.

When Mane went down under a challenge from Sergi Roberto, the Barcelona defender making some kind of contact, penalty appeals were waved away by referee Cuneyt Cunir.

Such was Liverpool’s fiery start Barcelona had just 38 per cent possession in the opening 10 minutes, although that did not mean they could not threaten with Lionel Messi forcing Alisson Becker to tip over and driving a half-volley wide either side of Joel Matip blocking a certain goal by the Argentinian, although he did not know the offside flag would go up seconds later.

The hosts, nevertheless, were dominating in what was turning into a brilliant game in a superb atmosphere and one can only imagine what a spectacle it would have been had key players Roberto Firmino and Mohamed Salah not been out injured.

Gerard Pique cleared from Henderson, Robertson denied by Marc-Andre Ter Stegen and Claude Lenglet pushing Mane to the ground without punishment as he threatened to run past him.

Alisson was still required to produce a hugely-important save to deny Jordi Alba in first-half added time but the real turning point came at half-time with Robertson, who took a kick from Luis Suarez – accidental or not – unable to continue.

Wijnaldum was sent on for the second half and James Milner dropped to left-back. It was a pivotal, if somewhat fortunate, change.

Within 11 minutes the Holland midfielder had scored twice; first charging into the area to drive a low Trent Alexander-Arnold pass under Ter Stegen and then rising highest at the near post to head home Milner’s cross.

As per last week Ernesto Valverde swapped another former Red Philippe Coutinho for a defender in Nelson Semedo and switched to 4-4-2 but it appeared to have little effect.

The pace of the game was taking its toll not only on Barcelona legs but also minds and when Alexander-Arnold spotted Origi unmarked in the six-yard box his quick thinking picked out the Belgium international to sweep home with 11 minutes to go.

Now Liverpool had the upper hand and Klopp immediately replaced the injured Origi with Joe Gomez to try to protect that advantage.

There were a few fraught moments but marshalled by the ultra-cool Virgil Van Dijk they saw off any threat to spark wild scenes at the end with the whole squad and backrooom staff celebrating on the pitch in front of the Kop.

A communal singing of club anthem You’ll Never Walk Alone capped the perfect evening as Liverpool now have a chance of redemption in Madrid next month.