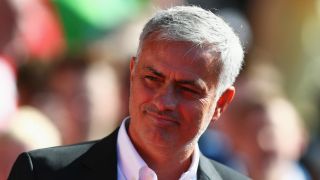 Jose Mourinho insisted Manchester United's trip to Liverpool is not make-or-break as the manager played down the consequences of Saturday's Premier League blockbuster.

United's unbeaten start to the season will be tested when Mourinho takes his side – second in the table but level on points with neighbours Manchester City – to Anfield.

The Red Devils have scored 21 goals and conceded just twice in seven matches to emerge as a contender to win their first Premier League title since 2012-13.

But Mourinho said United's season does not hinge on the result on Merseyside, where Jurgen Klopp's seventh-placed Liverpool are looking to climb the standings.

"The season is made of moments of ups and downs and you cannot win every match and you have to be strong enough mentally for both sides," Mourinho said.

"If a big game is only when you play Manchester City, or Liverpool, or Chelsea, then you have six big games a season," Mourinho added.

"The mentality I want with my players is that every match is a big match.