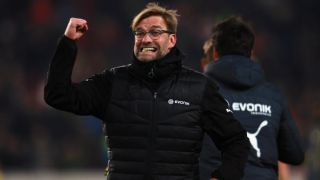 The former Borussia Dortmund boss is due to be unveiled as Brendan Rodgers' successor later on Friday after signing a three-year deal with the Premier League club.

Klopp has already spoken of his demands for "full-throttle football" from his players as he prepares to reignite Liverpool's season, in which they have won just two league matches so far.

And the 48-year-old has accepted he faces a formidable task in transforming the club back into one of English and European football's dominant forces.

"Thursday was a crazy day with what happened here when we landed. It's a great feeling and a big honour," he told LFC TV. "One of the best moments of my life. It feels like a dream.

"I love football and the intensity of football in Liverpool is good for me. I always thought about working in England and Liverpool was first choice. It's the best thing I can imagine.

"Now I'm really relaxed, it was an important decision. [I had] seven cool years at Dortmund and now I want to do something new.

"I want to see it, feel it, smell it. It's a great place, this is the most special place I've been. This is the most historical place. My experience is to listen, see, feel and then think about what to change.

"I've been in football for a long time, I don't want to make it too complicated. It's very important that the player can understand easily what you want.

"It's the biggest challenge in world football. But I was never the guy for the easy way.

"It's not so bad, 12 points. When I read the newspapers it's a disaster but it's only six points to another position but nobody is satisfied. So we have to think about what we can change.

"I know what I want, I have to talk to the players and find a common way."

Liverpool chairman Tom Werner has spoken of his hope that Klopp's charisma will help him connect to the Anfield crowd and the ex-Mainz boss says entertaining the fans is crucial to his plans.

"I understand football. If the people are not interested in football you can put some sticks in the park and play. It's the perfect game," he said.

"We have to entertain them, we have to make their life better. We are not saving lives, we are not doctors.

"It's our job to make them forget their problems for 90 minutes. That's how I would want to live if I wasn't a manager. I try to be as close as possible to the fans.

"Of course I will adapt, but I don't think about this because I know English football. But it's not so important at this moment because it is football."