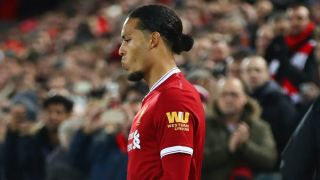 Virgil van Dijk has been left out of Liverpool's squad to face Manchester City on Sunday as the centre-back has a hamstring problem.

The Reds made Van Dijk the world's most expensive defender when they signed him from Southampton for £75million this month and he scored the winner on his debut against Everton in the FA Cup.

But the Dutchman's maiden Premier League outing for his new club has been delayed, with Jurgen Klopp naming Dejan Lovren and Joel Matip at the heart of his defence to take on the runaway top-flight leaders.

Van Dijk – whose absence is thought to be a precautionary measure – has already faced Pep Guardiola's side this season, losing 2-1 at the Etihad Stadium as the Saints fell to a last-gasp Raheem Sterling goal.

"He's a little bit injured but it's not too serious. He'll be ready for the next game," Klopp, who named Loris Karius in goal ahead of Simon Mignolet, told BBC Radio 5.

Liverpool have an excellent record against City at home, having gone 14 league games unbeaten against them on Merseyside, although they did lose the reverse fixture 5-0 in September.

A win would move Klopp's men level with Manchester United in second place on 47 points, a total also shared by Chelsea.

Van Dijk's next opportunity to feature in the league for Liverpool will come a week on Monday at Swansea City, while the side's next home match in the competition is a potentially crucial showdown with Champions League qualification rivals Tottenham on February 4.

Guardiola has named playmaker David Silva on the bench, with Ilkay Gundogan starting in midfield.