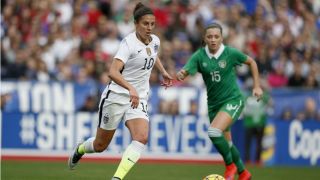 SAN DIEGO -- The United States women's national team kicked off 2016 and a new era in San Diego with 5-0 victory over the Republic of Ireland. It was a game that was supposed to be all about the youngsters. Instead, it was all about Carli Lloyd and Alex Morgan.

The U.S. women have finally finished celebrating their Women's World Cup victory and said goodbye to familiar faces like Abby Wambach, Lauren Holiday, Lori Chalupny and Shannon Boxx. The match up against the Republic of Ireland was a clean start for the next stage of United States Women's Soccer. Lloyd didn't miss a beat, scoring a hat trick in 28 minutes in the first half.

From the get-go, the United States dominated the game, keeping the ball mostly in Ireland's half. It took six minutes for Lloyd to sink USA's first goal. -- and her 80th for the USA. Lloyd was wide open at the top of the six yard box and tapped the ball in from a pass from Alex Morgan.

In the 21st minute, Lloyd notched her second, heading in a rebound from Ireland keeper Emma Byrne's block of an Alex Morgan header.

Just minutes later, Lloyd pounced on a bad back pass from Ireland and rolled the ball into an open net for her third -- taking her total for the USWNT to 82.

Alex Morgan didn't want to miss out on any of the goal scoring action, finishing a ball in the 45th minute after Lloyd's header came bouncing off the post. The goal was Morgan's 57th for the national team on her 100th appearance. She is the 34th U.S. female player to reach the 100 cap milestone. Morgan made her national team debut on October 2, 2010 against China.

Ireland struggled to maintain any sort of defensive shape and had very little possession throughout the game. There was one glimmer of a chance in the 4th minute when Whitney Engen scuffed a pass from Tobin Heath which left an Ireland striker open on goal. Engen recovered and Ireland's chance was gone as quickly as it materialized. It was the only real attacking opportunity for the Girls in Green in the first half. The second half was much of the same although they managed to make Hope Solo make two saves in the 79th minute. The first was a tip over the bar, the secon a point-blank header from a corner kick.

Lloyd was substituted at the half, perhaps giving some youngsters a chance to get on the score board. Mallory Pugh made her senior USWNT debut as a sub for Alex Morgan. The 17-year-old becomes one of the youngest women to play for the senior national team.

Pugh didn't miss out on her opening night either, scoring USA's fifth goal in the 83rd minuted with a header off of a cross from Christen Press.

With this friendly matchup, the USWNT is aggressively trying to fold in new faces and look towards qualifying for the 2016 Olympics in Rio. Manager Jill Ellis started adding some youth to the roster near the end of the Victory Tour, but in 2016, those youngsters will start having to prove they deserve a spot in the 18-woman roster that will head to Brazil.

As expected, Ellis gave field time to some newer faces; Crystal Dunn, Emly Sonnett, Samantha Mewis and Lindsey Horan all started the match. By the 59h minute, all the field players on the bench had been subbed in, including newcomers Jaelene Hinkle, Stephanie McCaffrey and Pugh.

The USWNT have an overwhelming record against the Republic of Ireland, having beaten them in all eleven previous times that they have faced off. Including Saturday's match, the U.S. has scored five or more against the Irish seven times.

The win against the Republic of Ireland sets the U.S. up nicely for its first CONCACAF Olympic qualifier against Costa Rica on Feb. 10.