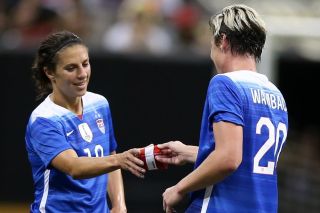 Coach Jill Ellis has marked the start of a new era for the U.S. national team with a change in on-the-field leadership.

Ellis has tabbed Carli Lloyd and Becky Sauerbrunn as the team's new captains, with Lloyd set to wear the armband when both players are on the field.

"I never thought I would be captaining the national team, but I'm humbled and it's an amazing honor," Lloyd said in a news release. "At this stage in my career, I'm ready to take on this type of leadership role, but I also know that this team features a lot of great leaders and we all lead in our own way."

Added Sauerbrunn: "It's a true honor to be named a captain of this team. I look at this group and what it's accomplished and the hunger we still have for the things not yet accomplished and I'm constantly amazed. It's a privilege to help keep that motivation strong and moving in the direction we want it to go."

The duo will take over for Christie Rampone and Abby Wambach, who had served the team's primary captains in recent years. Rampone, 40, made just seven appearances last year and currently is sidelined four to six weeks after undergoing knee surgery, while Wambach retired last month.

"Christie and Abby have been phenomenal leaders for this team for a long time, and we are forever grateful for their far-reaching contributions," Ellis said. "As we move into the next phase of this program, I've selected two captains who I know will represent us extremely well on and off the field and will help facilitate the positive direction of this team. They are two extremely professional players in both game and training environments and they embody the DNA of this program."

Lloyd, 33, won the Women's World Cup Golden Ball after scoring six goals during the Americans' triumphant run in Canada, while Sauerbrunn, 30, logged every minute of the tournament in central defense.

The U.S. currently is in camp as its prepares for the CONCACAF Olympic qualifying tournament in February. Just 16 of the 26 players in camp were a part of the World Cup squad, with Wambach, Lauren Holiday, Shannon Boxx and Lori Chalupny retired, Rampone and Megan Rapinoe injured, and Amy Rodriguez pregnant with her second child.