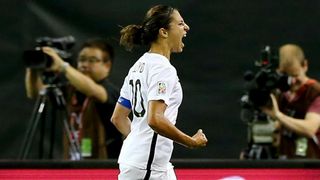 United States Women's World Cup hero Carli Lloyd was awarded the Golden Ball for her displays at the tournament.

Lloyd scored a hat-trick - including a goal from halfway - in Sunday's final, which USA won 5-2 over Japan.

Heading into the tournament, Lloyd was hardly a household name, but after her treble, everyone knows who she is.

Lloyd scored a blistering six goals and added an assist during the tournament.

She also won the Silver Boot after a double tie-breaker, which saw Germany's Celia Sasic take the top goal-scorer's award due to having played less time.

“I called her my beast," USA manager Jill Ellis said on FOX.

Lloyd was emotional when talking about her historic performance, and how she felt about working with her team-mates.

"I'm just so proud of the team, and everything hasn't sunk in yet. We made history and I'm so proud of it.

"I was on a mission to help this team win today. All of my hard work and preparation came through today. This is such an unbelievable group, and collectively, I"m so proud of everyone."