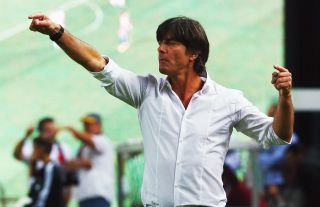 The normally resolute Germans were guilty of some uncharacteristic mistakes as goals to Jose Ariel Nunez, Wilson Pittoni and Miguel Samudio helped the Paraguayans to a 3-2 half-time lead.

A stunning 75th-minute volley from Lars Bender salvaged a draw for the visitors but it did not stop Loew's concern over his side's defensive frailties.

"We made elementary mistakes, tactical mistakes, especially in the beginning. We lacked concentration," Loew said.

"Overall in the first half, the whole defence was very erratic.

"The opponent had too much space.

"But you could see some players were missing match practice. The freshness wasn't there."

With most of the German side still in their pre-season, Loew said he could understand why his side was not at full peak and he promised improvement for their upcoming World Cup qualifiers.

"Of course the performances will improve once the players get into their seasons with their clubs," he said.

"We will improve through September and October."

"Next time we'll have time to work together, and we'll be better.

"It's normal when you have players coming together from different teams, all with different philosophies."

Germany are well-placed to qualify for Brazil 2014, five points clear of second-placed Austria ahead of their meeting in September.

"We can't play like that against Austria. It's a warning shot," goalkeeper Manuel Neuer.

"We need to analyse it and learn from it."