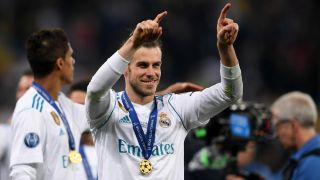 Real Madrid head coach Julen Lopetegui is convinced Gareth Bale can step up and lead a new-look attack in the absence of Cristiano Ronaldo.

Bale hinted at a move away from Madrid after his two-goal display in the Champions League final victory over Liverpool in May – the Welsh star frustrated with his lack of starts under Zinedine Zidane.

The 29-year-old's frustrations sparked rumours of a move to Manchester United but Zidane has since departed the Santiago Bernabeu and replaced by Lopetegui, while Ronaldo completed a sensational €112million transfer to Juventus.

And former Spain boss Lopetegui – who spent time at Madrid as a player – is planning to build his the LaLiga giants around Bale.

"When I signed, Cristiano still belonged to Real Madrid but soon he expressed his desire to leave," Lopetegui told reporters in Miami.

"As a coach, it is an exciting challenge to make a competitive team without Cristiano.

"[I have] recognition for one of the most important players in the history of Real Madrid, the club appreciated his legacy by facilitating his departure.

"We are convinced that Bale is going to have a great year and we expect a lot from him. We will work together for him to reach top form."

Madrid, meanwhile, have been linked with a host of stars as they attempt to replace five-time Ballon d'Or winner and all-time leading scorer Ronaldo.

Neymar, Eden Hazard and Kylian Mbappe have emerged as potential targets, while Chelsea goalkeeper Thibaut Courtois continues to be linked.

Our goalkeepers being our through their paces at Hard Rock Stadium. July 30, 2018

Speaking ahead of Tuesday's International Champions Cup opener against United at the Hard Rock Stadium, Lopetegui said: "We are delighted with the squad we have and are convinced that we will fight for all our objectives, and it cannot be any other way at Real Madrid.

"We want to be a great team on the pitch. If a player doesn't come or go, I will be a happy coach. We are not going to talk about hypotheticals. With the squad we have, we will be able to face the demands of Real Madrid."