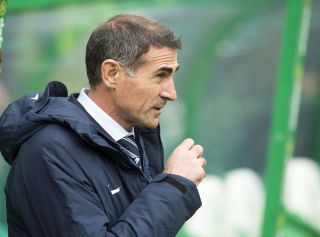 Kilmarnock manager Angelo Alessio vented his frustration at referee Don Robertson for dismissing Alex Bruce after just 13 minutes of their 2-1 defeat to Motherwell.

Bruce was adjudged to have fouled Chris Long as he raced through on goal but replays showed the defender made a perfectly-timed challenge to leave Alessio fuming.

“It wasn’t a free-kick and it wasn’t a sending off and that’s the defining moment of the game,” he said.

“Bruce clearly takes the ball but the referee decides differently. It changes the whole game because playing with 10 men for almost the whole game is difficult.

“I spoke with Alex and he said he took the ball. You can see the ball changed direction and it’s frustrating because it’s the most important point of the game.

“They are a very strong team, technical and physically imposing but we tried and created opportunities to score at the end.

“We are disappointed because 11 v 11 would have been a different game.”

It was double punishment for the visitors as Liam Donnelly fired Motherwell ahead from the resulting free-kick.

The Northern Ireland international deceived Laurentiu Branescu by firing under the wall to score his ninth goal in 13 appearances this season.

Kilmarnock showed great resilience to equalise in the 31st minute through Don Thomas, but Devante Cole grabbed a deserved winner for the hosts after 54 minutes when he headed home Jake Carroll’s cross.

Motherwell manager Stephen Robinson was delighted to see his side move third in the table, adding: “To find the energy levels to produce a performance after Sunday’s game was excellent, particularly the front players.

“I thought we played better against 11 men but it’s hard to play against 10 men.

“We had to show patience but we moved the ball from side to side and it was a great second goal to win it.