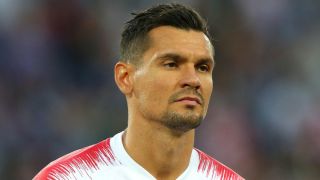 Dejan Lovren hit out at the suggestion he could be scared of facing Harry Kane when Croatia take on England in Wednesday's World Cup semi-final.

Gareth Southgate's Three Lions meet Croatia at Luzhniki Stadium for the right to take on France in the final, after their 1-0 victory over Belgium on Tuesday.

Kane, who still leads the Golden Boot standings with six goals, gave Lovren a torrid time in Tottenham's 4-1 Premier League win over Liverpool last October, in which the centre-back was substituted before half-time.

Lovren recovered from his poor run of form to play a crucial part in the Reds reaching the Champions League final and claiming a fourth-place finish in the top flight.

And the centre-back was far from pleased when a reporter asked if he was worried about the prospect of another meeting with Kane.

"I don't know what to say in response," he said at a news conference. "It's completely irrelevant, that one defeat against Spurs.

"Why didn't you ask me how I played well against him? You're nitpicking at my poor performances.

teammates Dejan Lovren and meet at Luzhniki Stadium in Moscow, on the eve of the semifinals! July 10, 2018

"I have all the respect for Kane, he's shown he is one of the best strikers in the Premier League, he gets goals, he's one of the greatest threats but he is not alone. His team-mates play at top clubs, it's going to be a difficult task but if we're ready to give our all on the pitch like against Argentina, if we're compact, I don't believe there will be problems."

Croatia are in the last four for the first time since 1998 but they had to survive two penalty shoot-outs against Denmark and Russia to make it this far.

Lovren, though, does not think fatigue will prove a problem against England.

"It's not the same if you play 90 minutes twice and 120 minutes twice, but I believe we've had ample time to recover and we're professional enough to know who needs what in terms of recovery," he said.

"I'm perfectly ready and fit. I can say the same for my team-mates. We know what's at stake and in such moments you forget any fatigue you may feel because this is maybe a once-in-a-lifetime opportunity.

"Everything is positive, we're enjoying every moment. Over the past several days, we've enjoyed it even more because we know what's been going on back at home."