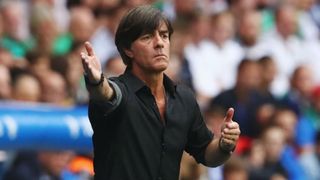 Low's team exited Euro 2016 in the semi-finals following a 2-0 defeat to hosts France in Marseille, after which the 56-year-old said he would discuss his role with DFB chiefs.

The national governing body announced on Tuesday Low will see out his deal, which expires in 2018, and he will now concentrate on leading the holders to the World Cup finals in Russia.

Low said: "The end of a tournament is a good time to pause.

"We were all disappointed after the semi-final and the weeks leading up to and during the tournament were exhausting.

"But for me it's clear: despite this disappointment our team did not disappoint. We had the tournament's youngest team and I still see a lot of potential.

"I am sure this team will bring us plenty of joy and I am as happy as ever to be able to work with these players and keep developing them towards the World Cup in 2018."

Germany were arguably the most impressive team in the tournament prior to meeting France, having qualified from Group C without conceding a goal before cruising past Slovakia 3-0 in the round of 16.

They required a penalty shoot-out to see off Italy in the quarter-finals before their luck ran out against Didier Deschamps' men in a match they dominated.

Low succeeded Jurgen Klinsmann as Germany boss following the 2006 World Cup and led them to the final of the European Championship two years later, losing 1-0 to Spain.

Spain accounted for them again at the 2010 World Cup, this time at the semi-final stage, while Italy upset them in the last four at Euro 2012.

The 2014 World Cup was to prove Low's finest hour, his side hammering hosts Brazil 7-1 in the semi-final before a Mario Gotze goal in extra-time saw off Argentina in the final.

DFB president Reinhard Grindel is pleased Low has decided to stay on, describing him as "the best coach for this team".

He said: "It was a question of respect in regard to giving the head coach a few days to himself after such an intensive tournament so he could analyse what happened in peace.

"However, we never doubted that he would be determined to continue his journey and work towards our main goal of defending the World Cup in 2018.

"I stand by what I said before and during the tournament: Jogi Low is the best coach for this team. He has our unconditional faith and we are confident that we can continue to play successful football in the future with him at the helm."