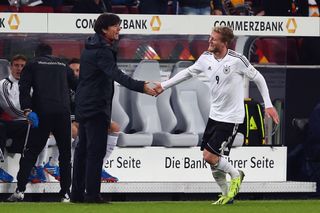 Germany secured their place at the 2014 FIFA World Cup as the winners of Group C thanks to goals from Sami Khedira, Andre Schurrle and Mesut Ozil in Cologne.

Low's men remain unbeaten in qualification and the Germany boss believes that Friday's win and the 3-0 victory over Austria in September offered glimpses of what his side are capable of.

"I look at previous campaigns, especially during Euro 2012. The team is more solid, more stable and more compact in defence," he said.

"I used this campaign to make my team more stable. It hinges around the opponent you play, they will have a major role in making games attractive or nice to watch for the spectators.

"Of course, we do have some things to tackle. Defensively, there is room for improvement. But the matches against Austria and here really came close to perfection."

Germany face Sweden on Tuesday in their final qualifier, with Erik Hamren's side ensured of a play-off place thanks to their 2-1 win over Austria on Friday.

The last time Germany and Sweden met last October, it resulted in a 4-4 draw, with Hamren's side scoring four times in the last half hour to complete a remarkable comeback.

And Low is out for revenge this time.

"Four-four after being 4-0 up, you will not be the media darling for that weekend," he continued.

"We had to take the flak for conceding four in a row, and there's no need to remind the team.

"We have played to our potential in the last two games and we have one more left.

"We have a score to settle with the Swedes, but all in the best professional manner."