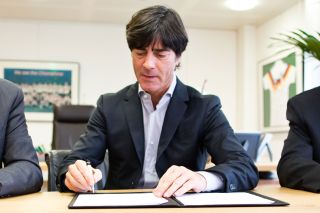 Low, who took over from Jurgen Klinsmann in 2006 following the FIFA World Cup, has agreed a two-year extension to his current deal.

That will see the 53-year-old lead Germany into his fifth major tournament, should they qualify for Euro 2016 in France.

Low led Germany to a place at next year's World Cup finals in Brazil in some style, after guiding them through qualification unbeaten - capping that run off with a 5-3 win over Sweden earlier this week.

The three-time World Cup winners have not lifted a major trophy since their victory at Euro 96, and Low is eager to achieve success.

"Working with the team and the coaching staff makes me very happy," he said in a statement on the official website of the German Football Association (DFB).

"I feel great motivation to develop the team.

"We are not yet at the end of our journey, we have big goals that we want to achieve together."

The contracts of assistants Oliver Bierhoff and Andreas Kopke have also been extended, and Low was quick to express his gratitude to the DFB.

"The DFB provides us and the national team with a perfect environment," he added.

"We are equally grateful for the trust that the DFB and president Wolfgang Niersbach place in us."