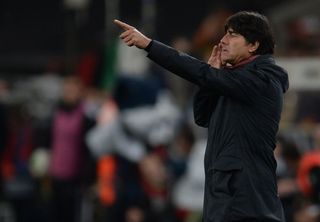 Goals from Sami Khedira, Andre Schurrle and Mesut Ozil gave the hosts a comfortable victory, and ensured their progress to next year's finals in Brazil as Group C winners with a game to spare.

Low has declared himself pleased with how Germany's qualifying campaign has gone after winning eight and drawing one of their nine matches.

"We have shown once again that we were the measure of all things in this group," he said.

"It was a very good qualification. From nine games we have won eight, so we can be satisfied.

"We are a good footballing team and it was a great evening.

"Now with Sweden (Tuesday's opponents) we have a little unfinished business, but I may give one or two a break and there may be some changes."

Low held special praise for two of his key players in the win over Ireland, goalscorer Ozil and Toni Kroos, who created two of the three goals on the evening.

"Kroos was exceptionally good," he said.

"Ozil should at times drop deep because it suits the Irish if one man is constantly at the top (of the formation)."

Captain Philipp Lahm reflected briefly on what was a comfortable win before looking ahead to the World Cup finals in 2014.

"Ireland had opportunities, but we actually had everything under control," he said.