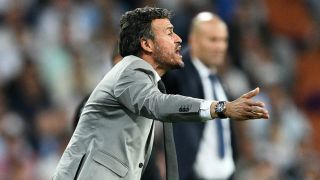 Luis Enrique feels Real Madrid's Champions League dominance does not mean the club have enjoyed a more successful spell than Barcelona under his leadership.

A star for both teams during his playing days, the Asturian coach will leave Barca at the end of the campaign, having guided the Catalans to two LaLiga titles, two Copa del Rey wins and one Champions League crown, with this season's championship still up for grabs.

Madrid have not finished on top of LaLiga since 2012, but they have won two of the last three Champions Leagues, beating local rivals Atletico Madrid in the final in 2014 and 2016, either side of Barca's 2015 triumph.

Zinedine Zidane's holders look set to reach another final this term, having beaten Atletico 3-0 in the first leg of their semi-final at the Santiago Bernabeu on Tuesday.

Nevertheless, Barca's coach is not interested in comparing the teams' recent European records.

"That's a statistic, it shows how strong Real Madrid are as a club," he said when asked about the prospect of Los Blancos progressing to yet another decider.

"It's a little biased to look just at what they've done in the Champions League. You can look at what Barca have done as well, we have reasons to feel positive.

"I focus on what I can control, our club, our team. Every club has different main rivals that you focus on more than any others and maybe that's what you're gauged against. Focusing on my own team works well for me.

"I'm really only focusing on what Barca do. I don't want to analyse what other teams are doing. I focus on my team. If we win a title, then great. Let's see what happens."

Check out the best photos from today's training session: May 5, 2017

Madrid may yet deprive Barca of the league title. Although the reigning champions are top, Zidane's men are level on points in second spot and have a game in hand approaching the dramatic conclusion to 2016-17.

"We need to win every game to have any hope of winning the league," said Luis Enrique.

"Primarily it depends on ourselves and what we do.

"Our first year we won the league in the penultimate game, last year it was the last game. This year it looks like it will go down to the last game. If anybody knows what will happen, please tell me.

"It's the same story at the end of every season. They've been tight run-ins, one team edges ahead, one edges behind. You need to let these things effect the players as little as possible… [because they are] trying to cope with the pressure."

Luis Enrique indicated captain Andres Iniesta is nearing a return to fitness after the midfielder missed the derby win over Espanyol due to an adductor injury.

"In principle he's been training for two days without any problems. He seems fine to me," added the coach.

Luis Enrique on Andrés Iniesta: "He has been training well with the group for the last two days. He's in good shape" May 5, 2017

Iniesta is out of contract at the end of next season and has been tipped in some quarters to seek a transfer away from Camp Nou, with Luis Enrique unable to predict the stalwart's next career move.

"That's not a question for me to answer," he said.

"We all know how well he's done at this club, we've all enjoyed his football, but it's not for me to comment on."