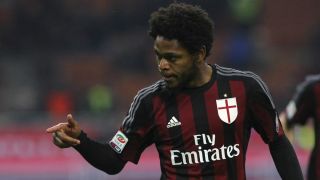 Luiz Adriano is in talks over a move away from AC Milan just six months into his career at San Siro.

The 28-year-old joined from Shakhtar Donetsk in July in an €8million deal but has struggled to find his feet in Italy, scoring just five goals in 20 appearances in all competitions.

Reports have gathered pace that Milan are willing to cash in on the striker in order to bolster their funds for some further investment in January, as they aim to mount a challenge for the Champions League places in Serie A.

And, despite head coach Sinisa Mihajlovic having voiced his concern over his side's attacking threat in recent weeks, Milan have confirmed the Brazilian will not face Carpi in the Coppa Italia on Wednesday due to negotiations taking place over a move.

"Luiz Adriano is not in the squad for Milan-Carpi because he is at the centre of transfer negotiations," Milan Channel stated on Tuesday.

Clubs in Russia and China have been linked with the former Internacional striker, who scored nine goals in last season's Champions League for Shakhtar.