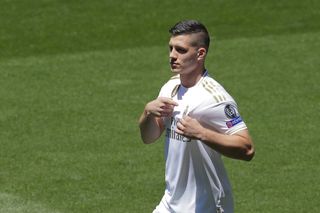 Luka Jovic described himself as “the happiest kid in the world” after being presented as a Real Madrid player on Wednesday.

Serbia striker Jovic, whose move from Eintracht Frankfurt for a reported 60million euros was announced last week, has signed a six-year contract at the Bernabeu.

“Now I’m the happiest kid in the world after signing a contract with the biggest club,” the 21-year-old is quoted as saying by the club’s official website.

☝🏟 The moment Luka Jović stepped out on to the Bernabéu pitch for the first time as a @RealMadrid player!#WelcomeJovic | #RMTVpic.twitter.com/JcQ9SBaLy3— Real Madrid C.F. 🇬🇧🇺🇸 (@realmadriden) June 12, 2019

“I’m going to give everything to help Real Madrid win more trophies and titles. Thank you everyone.”

President Florentino Perez expressed his hope that Jovic could help return Real to greatness following a difficult season in which they failed to win a single trophy.

“Today we want to share with all the Real Madrid players the start of a new project for next season,” he said.

“This club never gives up and we will prove it again. Today is one of those days when lots of Real Madrid fans feel the happiness of welcoming one of those players destined to be a part of that mission.”

Jovic played a key role in Bundesliga side Frankfurt’s run to the Europa League semi-finals before they were knocked out by Chelsea in a penalty shoot-out at Stamford Bridge.

He scored 27 goals in 48 appearances in all competitions for Frankfurt last season, including 10 in the Europa League.

Jovic spent two seasons on loan at Frankfurt from Benfica before the move was made permanent in April.

Fellow new arrival Eden Hazard, who has signed a five-year contract to join Real from Chelsea in a deal that could rise as high as £150million, is due to be presented on Thursday.