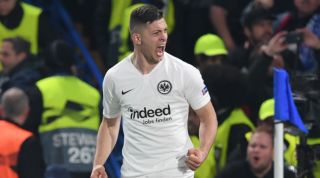 Real Madrid have announced on their website that the Serbian has joined the club, subject to a medical.

They confirm that Jovic will be under contract for six seasons until summer 2025, although no fee has been announced.

The 21-year-old will likely be part of a huge overhaul in Madrid this summer as they look to return to the very summit of Spanish and European football.

10 big players who are available on free transfers this summer