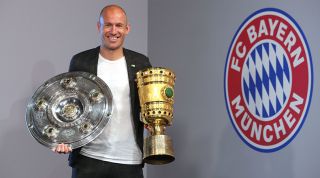 Sturridge is set to finally leave the Reds after spending six years at Anfield. Although the 29-year-old striker started off as a keen favourite for Liverpool, and peaked with a terrific 2013/14 alongside Luis Suarez, he has struggled with injuries and form in recent years and quickly been superseded by Mohamed Salah, Roberto Firmino and Sadio Mané.

After a loan spell at West Brom last year (six appearances, no goals), it looks like his contract will finally be coming to an end. So who wants in?

Despite the Algerian winger’s good form this season which helped Porto to second in the Primeira Liga this season, Brahimi is going on a free transfer this summer – giving the 29-year-old good bargaining power with a prospective new club.

West Ham and Everton are among the favourites to land his signature, but Record reports that Brahimi is after a €6m signing-on fee and three-year contract to boot. His lack of sell-on value thereafter could be an issue, however.

Mata’s time with Manchester United hasn’t exactly been plain sailing either. The Spaniard has endured his fair share of ups and downs (mainly more of the latter) during his time at Old Trafford, and with his contract running out this summer there are no plans for an extension.

The 31-year-old has no shortage of suitors: he has been linked to numerous clubs in the Premier League and La Liga, including his former club Valencia. Barcelona have also been credited with surprise interest too – as have Rafa Benitez's Newcastle, currently awaiting news of a takeover.

Although Cahill has confirmed his departure from Chelsea, he may still be a key figure within the Premier League in 2019/20. After spending seven seasons with the Blues – during which time he won every trophy available to him at club level – his experience has made him a target for other Premier League clubs this summer.

The 33-year-old defender has been linked with former club Aston Villa to hook up with John Terry once more, while another former team-mate in Frank Lampard could be keen. Derby missed out on promotion via the play-off final but are looking to reinforce as they go again next term.

Ribery is another big name available for nothing this summer, with his time at Bayern Munich finally coming to an end. The 36-year-old winger says that despite having a long, successful career in football, he still plans to continue on playing next season.

It's unknown at which level yet, and the Premier League may be a tad ambitious given his age. Markus Babbel's Western Sydney Wanderers have already ruled themselves out of contention after being priced out of an approach for the former France international.

Olivier Giroud: the World Cup-winning stopgap who has never quite found his place

Ribery’s team-mate Robben is also set to leave Bayern Munich this summer. Despite rumours circulating that the winger would retire, there have been rumours linking the veteran Dutchman with a surprise move to Leicester – which seems unlikely, given the Foxes' usual transfer profile.

A payday in the Chinese Super League may also be a possibility for the 2013 Champions League winner, but Bild say that Benfica have shown an interest; as have Ajax, PSV and first club Groningen.

Unai Emery has confirmed that Welbeck won’t be spending his future with Arsenal, and his contract with the Gunners is coming to an end. Where he will end up next season is uncertain, with several clubs including Everton, West Ham and Newcastle all showing interest. His injury troubles don't make him an entirely convincing addition, however.

Rabiot’s availability has sparked interest from two Premier League teams in particular: Manchester United and Arsenal. However, they aren’t the only ones interested in the 24-year-old central midfielder, who has also been linked with a switch to Barcelona, Bayern Munich or Juventus.

His disciplinary issues are off-putting, however. The PSG man hasn't played for them since December thanks to his conractual dispute, has been suspended by the Ligue 1 champions for being spotted in a nightclub and 'liking' an inflammatory Patrice Evra Instagram post, and refused to be on France's standby list for the 2018 World Cup.

Luis’s contract with Atletico Madrid will end this summer, after an eight-season association with the La Liga team (sandwiching an altogether less successful stint at Chelsea in 2014/15).

Marca suggest that he could get a big move to Barcelona this summer too, where he would provide support to first-choice left-back Jordi Alba, but Wolves are also credited with serious interest.

Striker Kruse will also be one of the free agents available this summer after three years at Werder Bremen. After 11 goals in the Bundesliga this season, the 31-year-old former Germany international could be an interesting addition to the Premier League.

Surprisingly, Liverpool are considering him as a back-up option replacement for Sturridge, according to reports.

The 9 best teams that DIDN'T win a thing

Quiz! Can you name all 28 clubs to win the Europa League/UEFA Cup?