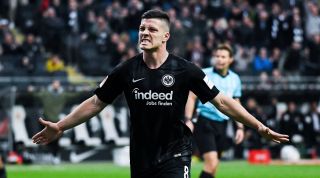 Real Madrid have won the race to sign Eintracht Frankfurt striker Jovic, according to Spanish publication AS.

The Serbia international has enjoyed a superb season for the Bundesliga side, scoring 26 goals in 44 appearances to help Eintracht battle for a top-four finish and reach the Europa League semi-finals.

Jovic has been tracked by a host of European giants throughout the campaign, with Manchester United, Chelsea and Barcelona all linked with a move for the 21-year-old.

However, Madrid appear to be on the verge of completing a deal for one of the most in-demand attackers in Europe.

AS report that Jovic will move to the Santiago Bernabeu for £51m this summer, with the former Benfica man set to partner Karim Benzema in attack.

Madrid youth-teamer Pedro Riaz, 19, will move to Frankfurt as a makeweight in the deal.

Zinedine Zidane’s men face Villarreal on Sunday as they attempt to bounce back from last weekend’s shock defeat by Rayo Vallecano.