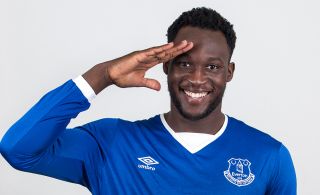 The Belgium international made just one Premier League start in three years as a Chelsea player after failing to force his way into Jose Mourinho’s plans, spending consecutive campaigns on loan at West Bromwich Albion and Everton.

Having totalled 32 league goals across those two temporary spells, Roberto Martinez was keen on making Lukaku’s move to Merseyside permanent, eventually getting his man for a club-record £28 million in July 2014.

However, it took several telephone calls from the Spaniard, and a little help from Lukaku’s mum, to eventually seal the deal for the former Anderlecht marksman.

“He [Martinez] actually called me three times and I didn’t pick up on the first two, so I’m glad I answered eventually,” Lukaku says in the February 2016 issue of FourFourTwo magazine, out now.

“I discussed it with him, I spoke to Chelsea, I spoke to my mother, and eventually she said: ‘Go to Everton.’ I haven’t regretted it.

"Right from the very first training session it has been great. He took me aside and we worked on movement, my hold-up play, everything. With all the good young players coming through, it felt like something good was happening.”

Something good has definitely been happening for the 22-year-old in 2015/16. Fifteen goals in 20 appearances have helped him become only the fifth player to score 50 Premier League goals before turning 23, a prestigious club that includes Cristiano Ronaldo, Wayne Rooney, Robbie Fowler and Michael Owen.

And Lukaku, hailed as the ‘new Didier Drogba’ during his stint at Stamford Bridge, believes that he is getting closer to becoming the complete package.

“This year, I have been great,” he says. “From the first game this season, against Watford, I’ve been getting close to being the complete striker. I have the mentality, and I am very... constant. Whoever we play against, I know what to do. If they don’t leave space behind, I’ll be playing with my back to goal. I know I’ll find a way to score. I just want more, because it feels great.

“As a kid in Belgium, I’d be great for three months, then terrible for one. And just two years ago, if I was having a poor game, my head might have gone down. I’d have thought: ‘It’s not my day today.’ Now I never give up. In the moment your team needs you most, you need to be there, to lead.”

Read the full interview with Romelu Lukaku in the February 2016 issue of FourFourTwo, which also features a One-on-One interview with Eric Abidal and reveals the truth about the most misunderstood player of a generation: Francesco Totti. Also in the magazine: remembering Sven-Goran Eriksson’s appointment as England manager 15 years ago, Bolton’s fall from grace and five Football Players who have gone back to school to help safeguard their futures. Subscribe!