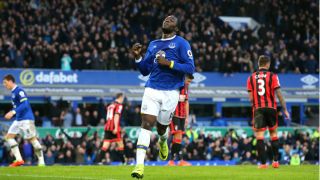 Ronald Koeman labelled Everton's Romelu Lukaku "one of the best strikers in the world" after the Belgian's four-goal haul inspired a 6-3 victory over struggling Bournemouth.

Lukaku put Everton ahead after just 30 seconds at Goodison Park, setting the tone for a remarkable game in which he would go on to secure his second hat-trick of the season as the hosts survived a second-half rally from Eddie Howe's men.

Everton's defending may have left a lot to be desired but Koeman - whose side are unbeaten in the league in 2017 - was delighted with Lukaku's display.

"Lukaku was outstanding - very clinical," Koeman told Everton's official website. "I have never seen a striker so clinical with his finishing.

"He got four goals today from four chances, that's how good he was. He showed today that he is one of the best strikers in the world.

"It isn’t a normal result in the Premier League, and there were more chances for both teams.

"We were comfortable at half-time, but Bournemouth did well, and we dropped our intensity.

"At 3-2 we changed the system, we got the control back and scored some fantastic goals, but we conceded three and that’s not the standard we want.

"We are improving a lot with our possession and our pressing. We did it for 45 minutes today and then in the last 15 minutes as well, but we did not show it for most of the second half.

"We look around us and above us, and we just have to win every game. Then you can put the pressure on the teams above, but that is down to us."

Meanwhile, Lukaku believes that Everton - who have already claimed more points at home this season than they did for the entirety of 2015/16 - displayed their resilience by overcoming Bournemouth's spirited comeback.

"We started well, we did what we had to do. It’s disappointing we conceded the goals, but we showed mental resilience," Lukaku told BBC Sport.

"We said we wanted to come out flying, we worked on it all week. We were sharp and we continued pressing, but after half-time we weren’t mentally sharp.

"We need to see the clips again because if you want to improve we need to get rid of the little problems. There’s no lack of confidence. We know that hard work pays off."