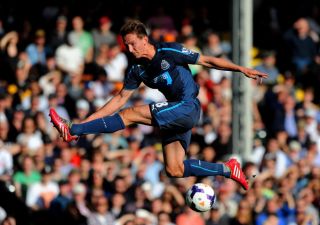 His younger sibling Luuk spent the second half of the last campaign on loan at Newcastle but the forward struggled for form, his 12 appearances failing to yield a single goal.

However, Louis Laros, the brothers' agent, believes the duo could link up next term as Luuk returned to pre-season training with Borussia Monchengladbach.

"Luuk's very happy for Siem – he gave him good advice," Laros said in quotes reported by The Shields Gazette. "The two brothers are not twins but they are very, very close.

"It could be an option for them to play together for Newcastle because the two boys are very complementary to each other.

"Luuk is a striker and Siem plays behind him so it could be the perfect match.

"There's nothing happening at the moment but you never know in the future.

"At the moment, Luuk is back in Germany, because Newcastle didn't take up the option to sign him.

"Newcastle are still looking for strikers, though, and maybe will come back later in the window for him.

"The door is never closed."