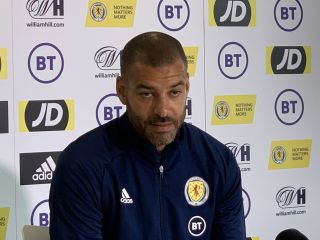 Steven Reid insists there will be no qualms about putting Scotland new boy Lyndon Dykes straight into the side for the visit of Israel on Friday night.

The 24-year-old striker was born on the Gold Coast to parents from Dumfries and recently joined QPR from Livingston.

Dykes, who started his professional career at Queen of the South, could have played for Australia but opted for Scotland and was included in the squad by boss Steve Clarke for the first time for the Nations League double header against Israel and Czech Republic.

With Oli McBurnie joining fellow striker Lawrence Shankland in pulling out through injury, Dykes’ chances of game time have improved.

Scotland coach Reid said: “He is a player that has been closely monitored for a long period of time.

“We’re delighted that he has made the decision and is with us. He is a confident character and it’s good to get him involved.

“I think he will be ready. He’s up to speed and looking sharp and I think he is going to be in the right frame of mind if he is called upon to hopefully continue the outstanding form he has shown for a long period of time.”

Reid insists Scotland have sufficient firepower within the depleted squad, which was bolstered by the call-up of Cardiff utility man Callum Paterson.

Reid said: “I think we have good attacking options. We have players who can play in midfield but also play a little bit higher if need be.

“John McGinn has been in free-scoring form for us from those midfield positions and we have good attacking options going forward, good creativity in the team so I think the squad is equipped to deal with one or two injuries.

“It is disappointing that the lads had to pull out with their respective injuries but it is an opportunity to bring Callum in and hopefully he takes that opportunity. I think the squad is strong enough to compete in these two games.”

Arsenal defender Tierney has yet to play for Scotland under Clarke due to a series of injuries.

Reid said: “I have not worked with Kieran before. Hopefully the injury issues he had at the start of his move to Arsenal are behind him.

“He has broken into the team and has been getting plaudits from around the country and it is good to have them both and it is a good dilemma to have.

“We don’t see it as a problem, we see it as having good quality players in the squad.

“Kieran has played left-sided centre-back in recent games with Arsenal, left wing-back, he had certain games at right-back in his career.

“That versatility is a benefit but ultimately it is picking the best team for the game. We will look at it and assess it this week.”