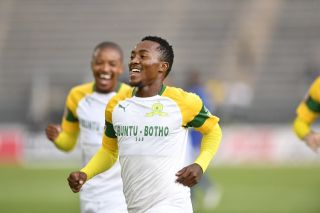 Mamelodi Sundowns attacker Lebohang Maboe is pleased with the team’s character following their victory over Black Leopards on Saturday afternoon.

The 25-year-old played a crucial role in helping Masandawana clinch the 2019-20 Absa Premiership title, having bagged four goals and three assists from 41 appearances across all competitions.

However, Maboe’s best performance came on the final day of the league campaign when he scored a hat-trick during Sundowns’ 3-0 victory over Leopards on Sunday.

The Bafana Bafana international reflected on Sundowns’ campaign after being named Man of the Match as they clinched a third successive league title.

‘We worked hard as a team. Credit to the coach and the team. We really put up a fight,’ Maboe told the club’s social media platforms.

‘We were really willing to fight until the end. This is for the fans who kept us going throughout the entire season.

‘I am very excited having helped the team defend the league title.

‘It means a lot to us and the fans. It is a pity that they cannot be here to celebrate with us. This one is for them. La Decima [10th] league title.’